When to publish, how to describe it, what art to use - all important questions, and all answered (among others) right here

Your Steam page is your most powerful marketing tool, but building a Steam page from scratch is daunting. As you’ll know if you’ve already poked around in the Steam backend, a large portion of what becomes your public-facing Steam page is, behind the scenes, a big, unnerving, empty text box. It can be enough to make you break out in a cold sweat.

Within Steam, you’re trying to appeal to both the Steam algorithm and potential players. You want each to take an action based on what’s on your page. Pleasing them both is a compound joy; the more the algorithm likes your game, the more people will see it and take action on your page, and round it goes, driving your wishlists up - or that’s the idea!

You want to build trust with these potential players. When they come to your page, they should feel confident of three things as quickly as possible:

To convey all this, you need to make the genre, theme and personality of the game clear, make sure all of the technical information is correct, and keep updating the page so it is clear that the game hasn’t been abandoned. Then they’ll have all the information they need to hopefully wishlist or buy your game.

There’s a lot of conflicting wisdom on this, but in short you’re hoping to put up a page as soon as you can, but not before it looks sufficiently decent. You’ll probably get the most eyes on your page when it first launches on Steam (this will depend a little on whether you have a following to direct to the page, but it’s certainly true that the algorithm will be trying out a new page on people and observing what potential players do when they’ve seen it). Publishing the page super early to maximise the length of time you have to gather wishlists may sound smart, but if the page looks half-finished and unexciting, it’s a wasted opportunity.

I would recommend re-ordering development work if necessary to prioritise assets which will feed into your page, enabling you to get your page up early without compromising its look. Game clips with a polished HUD for the trailer, key character art, and assets that show the final look and feel of the game will add polish to the page and build a clear picture of what you’re offering to potential players.

The page description is completely up to you, which makes it the hardest part of the page! There are a few things which I recommend all games try:

Consider that many people will jump around your page when looking it over initially, and may not even watch your trailer. So, I recommend opening with a GIF which encapsulates your game: a really satisfying combat clip, combo payoff or hooky narrative moment. Then follow this with a brief introductory line and a tight list of your top five or six features. This should all ideally fit above the ‘read more’ link.

After that, you might want to dig into your features some more, and use more GIFs to illustrate them, or outline your cast of characters if they’re one of your strengths.

Don’t feel that you have to try and write flashy marketing copy. Trying to replicate what you might imagine a marketing person would write will lead you to phrases like ‘in a world where…’ - stuff which isn’t honestly you. You’re an indie, write from your heart. Use the first person. Talk openly and honestly about your game and why you think people will like it. Steam players, especially the ones who care enough to be browsing indie game pages, love indie success stories and want to feel part of them.

Capsule art needs to be impactful, clear, and descriptive of your game’s genre. The passing Steam user won’t necessarily stop to look twice at your capsule art to really absorb tiny details. So, a successful piece of capsule art is emblematic of exactly what you’re selling, and if possible, the best version of that kind of game (competitor research of other imagery in similar titles is really useful).

Steam asks you for capsule art at various sizes. Try to pick one iconic image - a main character, strongly thematic location, or emblematic asset - which will work at all sizes, and don’t be tempted to squeeze too much in. Crowded images don’t read well.

If you have a pixel art game, consider getting an illustration drawn up purely for promotional purposes. It’s hard to make pixel assets stand up as a representation of the themes of your game; character expressions don’t read as well, and at the smaller size of capsule art, you lose a sense of what’s being shown entirely.

[Use trailers to showcase your game, but don't get bogged down in the ceremony of it all - show the game]

There’s a wealth of information available online about how to make a cracking trailer for your game, and far more than I can cover here, but my top tips:

Your thumbnails need to convey the game’s genre as well as you can, as well as highlighting anything unique about it.

The first three of your thumbnails also need to work as a group which represents your core gameplay loop. These three will be turned into a little GIF that appears on mouseover next to your title, elsewhere on Steam.

One trick for making thumbnails that are really exciting is to make loads and loads, and then compare them to one another in pairs. Which is best, and why? If your game is supposed to be funny, which one is funniest? If your game has action, which one conveys the action most clearly? Discard one from each pair until you have halved their number, and then go round again until you have your dozen best.

Lastly: this isn’t a science, and you may not get it right straight away. Remember to return to your page regularly. If you’re in active development, this could be once a month or fortnight. If there’s been a significant update, do an announcement post about it! And make sure the page copy is consistently reflective of the best parts of your game. Keep honing it. When someone tries your game, ask them what the best part was. Does that sing out of the page? If you can keep working at this alongside your game, you’ll have a page that’s ready to do great business when you launch. Good luck! 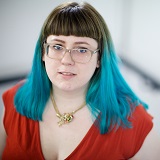 Hannah Flynn is Communications Director at Failbetter Games, where she has worked since 2015 on titles like Fallen London, Sunless Sea, Sunless Skies and Mask of the Rose. Her remit includes PR, marketing and community development. She lives in Brighton with her wife and two children.